skip to main | skip to sidebar

How to Disable IPv6 in Windows 2008 Full and Core editions

IPv6 is by default enabled in Windows Vista and Windows 2008. Many people argue that they’re having issues because they’re not using it and some apps may fail to work correctly due the fact of miss IPv6 configuration address or because the Apps don't understand IPv6. Before disabling IPv6 be aware that some new features on windows will require IPv6 to work, so be aware of that before starting to make changes to your servers or workstations.

So how to disable IPv6?
Simple, first disable IPv6 under your NIC properties (if you've multiple interfaces do it for each one) 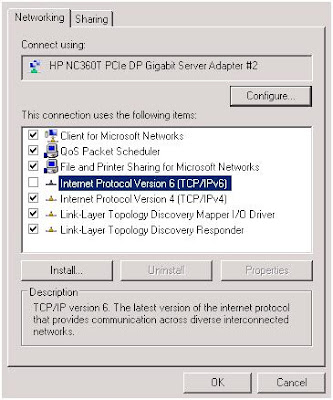 To completely disable IPv6 go to the following registry (Remember to ALWAYS backup the registry keys that you're changing before changing the):
HKEY_LOCAL_MACHINE\SYSTEM\CurrentControlSet\Services\tcpip6\Parameters\

Note that “DisabledComponents” is case sensitive and should be typed exactly like that.
DisabledComponents is set to 0 by default. To disable IPv6 support on all interfaces, set the value to FFFFFFFF. The registry entry will look like below:

Restart the computer for the changes to the DisabledComponents registry value to take effect.
DONE!!!!

In Windows core edition we don’t have GUI to disable the IPv6 under NIC properties, so option is to directly edit the registry.

To start lets try to disable IPv6 only in one adapter as if we were in a FULL installation mode :)
First let's identify the adapter to be disabled, to do that type:

Identify the NICs that you want to disable IPv6.

Then type regedit to open registry editor and navigate to HKEY_LOCAL_MACHINE\SYSTEM\CurrentControlSet\Services\Tcpip6\Linkage
Open the “Bind”, “Export” and “Route” String Values and remove the Adapter SettingID that corresponds to the listed NIC that you want to unbind IPv6. 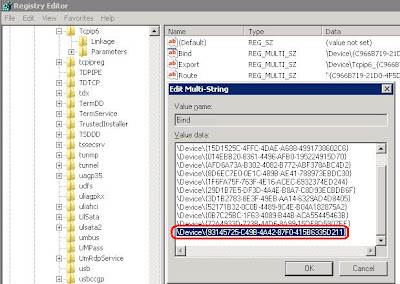 As you see the correspondent value is "0005" 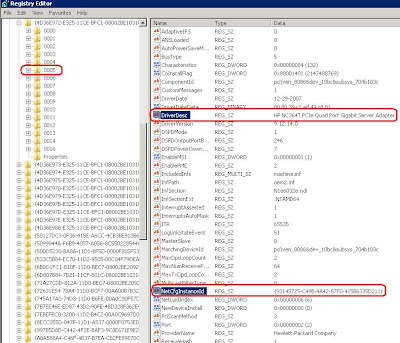 The next Step is to unbind the Tcpip6 from the adapter, to do that open the HKEY_LOCAL_MACHINE\SYSTEM\CurrentControlSet\Control\Class\{4D36E972-E325-11CE-BFC1-08002BE10318}\xxxx\Linkage\UpperBind key and remove the entry for Tcpip6. 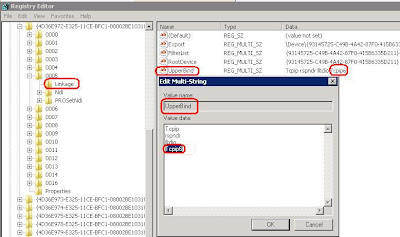 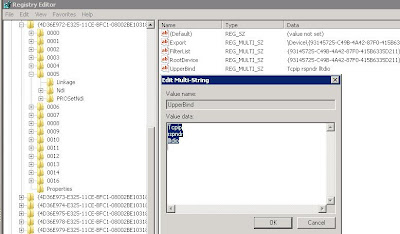 Reboot the server.
After the reboot, type from cmdline:
WMIC NICCONFIG WHERE IPENABLED=TRUE GET Description,SettingID,IPADDRESS /FORMAT:LIST
Now, as you can see you no longer have the IPv6 bound the that adapter.

Q&A
Q: And if I want to do this for more adapters?
A: Repeat the same process for each adapter that you want to disable IPv6.

Q: Can I use the “DisabledComponents” reg key as I did in Windows FULL edition?
A: Yes you can. In that Scenario you need to remove all the values from “Bind”, “Export” and “Route” that are under HKEY_LOCAL_MACHINE\SYSTEM\CurrentControlSet\Services\Tcpip6\Linkage, then, configure the “DisabledComponents” reg key as you did in Windows FULL edition under HKEY_LOCAL_MACHINE\SYSTEM\CurrentControlSet\Services\tcpip6\Parameters\ .
(No need to disable Tcpip6 under HKEY_LOCAL_MACHINE\SYSTEM\CurrentControlSet\Control\Class\{4D36E972-E325-11CE-BFC1-08002BE10318}\xxxx\Linkage\UpperBind )
You must restart the computer for the changes to the DisabledComponents registry value to take effect.

Q: Do you know any issue when using "DisabledComponents" in Windows Core?
A: Yes. after you configure the DisabledComponents in windows Core and reboot, if you use Computer Management to remotely connect to that server Core you may see a warning for the 6TO4 Adapter - "This device cannot start. (Code 10)". 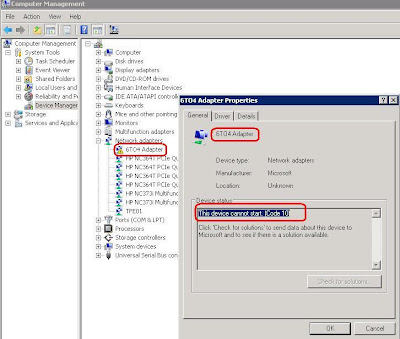 To solve this problem you need to disable the 6TO4 adapter (since that you're not using it) using the Netsh cmdline:
Posted by Eniac KB at 3:32 AM